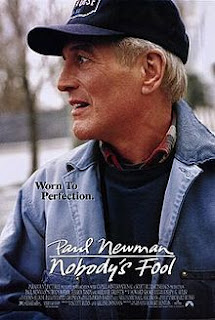 Honest question: who doesn't like Paul Newman? Seriously, how could one not love those dazzling blue eyes, that gorgeous smile and that charming personality?

In Robert Benton's Nobody's Fool, he is Donald "Sully" Sullivan, the local delinquent of a small New York town. Everyone in town knows how much of a troublemaker Sully is. Well, everyone except his visiting son Peter (Dylan Walsh).

Newman early in his career starred in a number of movies where he was a rebel or an anti-hero, such as Hud, Cool Hand Luke and Butch Cassidy and the Sundance Kid. Sully is no exception. Sure, he cares about a few of the local residents, but he mainly cares about his own well-being.

Like Ted in Benton's more famous work Kramer vs. Kramer, Sully is trying to reconnect with Peter as well as his grandson. It's an unsuccessful feat at first, but eventually he manages to form a sort of bond with them.

Nobody's Fool contains one of Newman's best later career performances. There's also some great work from Bruce Willis. Benton weaves a tale of forgiveness and hopeful understanding. In short, a film everyone needs to see at least once.

My Rating: ****1/2
Posted by MovieNut14 at 10:49:00 PM
Email ThisBlogThis!Share to TwitterShare to FacebookShare to Pinterest
Labels: 1990s, movies, reviews