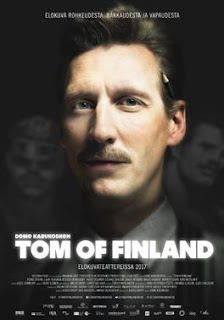 In the underappreciated world of erotica, no name is more synonymous with the field than Touko Laaksonen, better known to many as Tom of Finland. His works grew in popularity as the world slowly became more accepting of same-sex relationships. (The key word here is "slowly".) But what's the story behind the provocative images he created?

Dome Karukoski's Tom of Finland focuses on Laaksonen's life from his time in World War II to the peak of the AIDS epidemic. In between these periods of his life, we see how Laaksonen's private life shifts drastically and how the world's opinion on male homosexuality gradually becomes more open-minded. (The latter only reminds how far we need to go for total acceptance.)

Karukoski doesn't shy away from the fact that Laaksonen's drawings could've earned him serious trouble had he been found out (hence the pseudonym). There were many repercussions towards gay and bisexual men during Laaksonen's time, something only relatively recently has been corrected by various governments throughout the world. How much longer until there's total worldwide equality?

Back to the film. Despite its subject matter, Tom of Finland is surprisingly tame in its execution. (Granted, it can only depict so much without becoming the very thing that made Laaksonen infamous.) Still, it would've been something had it been more candid about Laaksonen's private affairs.

Tom of Finland is good in chronicling Laaksonen's rise as a peddler of smut but when it comes to capturing his personal life, it falls into the usual conventions of the genre. Still, it's nice to see there was more to him than what he drew. (His sketches certainly brought new meaning to "a picture's worth a thousand words", that's for sure.)

My Rating: ****
Posted by MovieNut14 at 9:53:00 AM
Email ThisBlogThis!Share to TwitterShare to FacebookShare to Pinterest
Labels: 2010s, movies, reviews