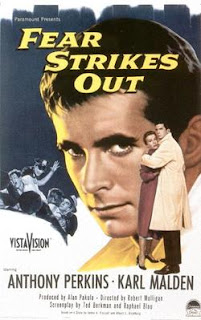 There are always those actors who get typecast. John Wayne and Clint Eastwood will always be the hero gunslinger, Sylvester Stallone and Arnold Schwarzenegger are the quintessential action movie stars, and Cary Grant and Gary Cooper were the epitome of the leading man. Of course there are other examples beyond these.

Take for instance Anthony Perkins. In the years since his 1992 death, audiences tend to acknowledge him as Norman Bates from Psycho. While there's no denying the greatness of his performance in it, that doesn't mean the rest of his filmography is to be ignored for the sake of that one. (He was an Oscar nominee, people!)

Interestingly, three years before Alfred Hitchcock's film, Perkins had a role where his character was under the thumb of a domineering parent. The role in question was baseball player Jim Piersall (who passed away last week) in Robert Mulligan's Fear Strikes Out, and there are similarities in how Perkins plays the two parts. (Pay attention to Jim's body language when he feels threatened.)

Though Fear Strikes Out is marketed as a biopic on Piersall's career, it's much more of a depiction of his stormy relationship with his father (Karl Malden). He's pushed beyond his means mentally to be the best at the sport, and you can see in some scenes him starting to crack under pressure. (Can you at all blame him for what happens?)

Fear Strikes Out is one of several prominent roles of Perkins' that's forever lost in the shadow of his most prolific one. It may not have the same punch it might have had when it was first released but what stands out after all this time is how the long-term effects of emotional abuse can affect more than the person who bore the brunt of it. (It's definitely cause for immense concern if it continues.)

My Rating: ****
Posted by MovieNut14 at 9:00:00 AM
Email ThisBlogThis!Share to TwitterShare to FacebookShare to Pinterest
Labels: 1950s, director: Robert Mulligan, movies, reviews