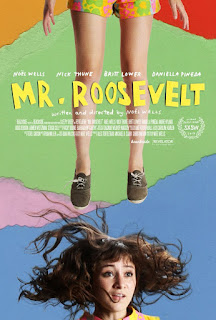 At some point in our lives, we get that feeling of being stuck. We get the notion that by now we should have everything about us in order but we don't know how to achieve it. A daunting prospect, maybe, but it's normal to feel a little lost.

Noël Wells' Mr. Roosevelt has Emily Martin (Wells) realizing this harshly several times. She at first seems content with how she's living her life in Los Angeles but after a personal crisis beckons her back to Austin, she starts to re-evaluate her situation.

It's a familiar concept amongst independent features as of late, yes, but Wells shows how the sometimes serious premise can have its lighter moments. That said, however, Wells certainly doesn't shy away from how often Emily's at fault. (Since Wells wrote the script as well, perhaps she herself encountered this in her own life too.)

But that's not to say Mr. Roosevelt is solely Wells' show. Her script provides the supporting characters their own distinct personalities. And the actors in said roles make the most of them, Danielle Pineda especially.

Mr. Roosevelt shows promise in Wells as a creator and a performer (though Master of None might have proven the latter already). It has the usual conventions of comedy, yes, but it still equates to an entertaining end result. Hopefully this won't be the last time we hear of Wells.

My Rating: ****
Posted by MovieNut14 at 10:22:00 AM
Email ThisBlogThis!Share to TwitterShare to FacebookShare to Pinterest
Labels: 2010s, directed by women, movies, reviews