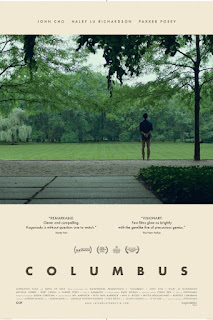 You know how in some fiction, the setting plays as much of a role as the characters and plot? A number of Martin Scorsese's films have New York City as did Federico Fellini with Italian locales. And other times, it's small towns that get this treatment.

Kogonada's Columbus is set within the titular Indiana city, its many structures playing a role in the film as well. Using many static shots throughout (the camera only moves very rarely), it's one of those films where simplicity is on full display. But what is it about?

Columbus follows two people who find their bonds with their parents almost constricting. Because of his culture, Jin (John Cho) is expected to be by his ailing father's bedside. Casey (Haley Lu Richardson), however, is happy to tend to her mother's needs even if it means putting her own ambitions on the back burner.

What Columbus shows is how the familial bonds differ from person to person. Some begin to fray as they get older while others grow stronger. But regardless of the connection's strength, tensions still remain for the parties involved. (It's simple human nature, no bones about it.)

Columbus provides a sort of contradiction of itself: thought-out but meandering, precise but pretentious. Still, Cho and Richardson continue to show their worth as actors, Richardson in particular. And Kogonada in turn shows promise in a career in directing feature films, having already made a name for himself in video essays. (Seriously, he should be a recurring presence in the years to come.)

My Rating: ****1/2
Posted by MovieNut14 at 10:22:00 AM
Email ThisBlogThis!Share to TwitterShare to FacebookShare to Pinterest
Labels: 2010s, movies, reviews