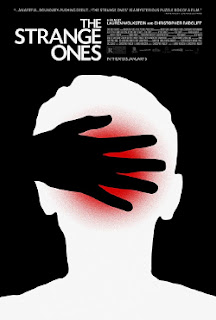 Early on in Christopher Radcliff and Lauren Wolkstein's The Strange Ones, it's clear something's afoot. Initially it seems that Sam (James Freedson-Jackson) and Nick (Alex Pettyfer) are en route to a camping trip. But it becomes clear from their behavior -- Nick's in particular -- that they're hiding something...

Admittedly what's following Sam and Nick is made clear early on (as well as the circumstances that led them to their current situation) but it's one that becomes obvious if you're familiar with such premises. (Though it's worth mentioning that this is an expansion of sorts of a short film by Radcliff and Wolkstein.)

But what of The Strange Ones in particular is worth mentioning? Indeed it focuses on the recesses of the mind but admittedly it isn't anything we haven't seen before. However, it does show our fascination with the dark places one can delve into.

In fact, that's something The Strange Ones excels at. What does drive someone to cross moral boundaries? Is it something as simple as greed or infidelity? Or could darker urges be the ones at fault? Regardless of the reason, we always are drawn to such stories.

The Strange Ones overall doesn't deliver the potential it alluded to at the beginning. Still, the work from Pettyfer and especially Freedson-Jackson make it worth a look but they can't salvage it completely. (Hey, win some, lose some.)

My Rating: ***
Posted by MovieNut14 at 10:00:00 AM
Email ThisBlogThis!Share to TwitterShare to FacebookShare to Pinterest
Labels: 2010s, directed by women, movies, reviews