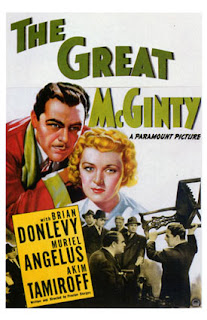 There's something worryingly ominous about Preston Sturges' The Great McGinty. The titular McGinty (Brian Donlevy) rises amongst the political ranks through means of bribery and other dirty means. At first he only uses his position in office as a title. It's once he starts developing something of a conscience that he starts getting into some hot water.

This being Sturges' first time in the director's chair, The Great McGinty displays the traits found in his later works. Being made in a time of looming unrest (the United States' involvement in World War II was just around the corner), he knew that moviegoers -- as he would examine in Sullivan's Travels -- wanted to escape from everyday life periodically. (They didn't want reminders of what was happening beyond the theater's exits.)

An interesting bit of trivia about The Great McGinty for you. Sturges sold the script to Paramount Pictures for $10 (which is under $200 in today's money) on the condition that he directs it as well. He had already spent several years in Hollywood so Paramount must've had faith in Sturges. (Him winning an Oscar for the script also helped his budding career.)

In a way, The Great McGinty bears resemblance to Mr. Smith Goes to Washington from the previous year. Both Dan McGinty and Jefferson Smith are thrown head-on into a corrupt political circle. The main difference is that Smith's ideals are unwavering; it's when McGinty starts listening to the people that his initial beliefs begin to shift.

The Great McGinty provided audiences a glimpse of what to expect from Sturges in the coming years. With a mix of satire and slapstick, it's clear that its director and writer wasn't going to suffer fools gladly by those more privileged than him. He would cut them down to his level.