BOOK VS MOVIE: The Zookeeper's Wife 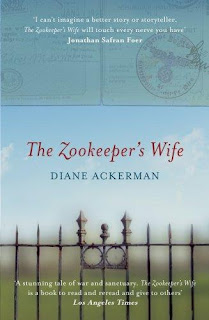 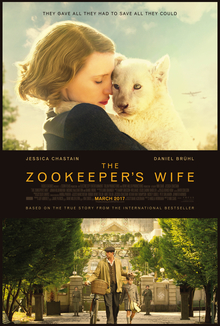 There's no way in denying the lengths a society will go to keep their world "pure". The most egregious example from history is the Holocaust. Millions of innocent lives either destroyed or cut short, all for the appalling sake of ethnic cleansing. But even amid those atrocities, there were those who weren't going to let defenseless people suffer.

The most famous of these saviors amid slaughter was Oskar Schindler but there are those who, outside their native countries, aren't as prominent. Take for instance Jan and Antonia Żabiński. After their native Poland was invaded by German forces -- the catalyst for World War II -- they used their home and bombed-out zoo to help those escape from Nazi persecution. As a result, they saved nearly 300 people from certain death.

Diane Ackerman's novel The Zookeeper's Wife chronicles the Żabińskis lived their lives as the German army occupied Warsaw. In their many ways to conceal those in hiding, they had to be discreet about the extra people within their home while at the same time fighting and aiding the enemy. (They had to stay on their toes for a long time.)

As well as using Antonia's diaries for further details, Niki Caro's adaptation follows Ackerman's novel to the letter. That said, there are a few details clearly fabricated for the film. (The most glaring one are the scenes of supposed intimacy between Daniel Brühl -- who should probably invest in a different agent -- and Jessica Chastain.) Still, Caro tightens the reins on those as well.

Does Ackerman's account of the Żabińskis' heroics reign supreme or does Caro's claim the title? Both shines a light on names forgotten by history as well as the hypocrisy of the Nazi Party's actions. However, one of them doesn't get overly softhearted for the sake of reaching a wider audience.

What's worth checking out?: The book.
Posted by MovieNut14 at 11:17:00 AM
Email ThisBlogThis!Share to TwitterShare to FacebookShare to Pinterest
Labels: book vs. movie, directed by women, memoirs/biographies, reviews