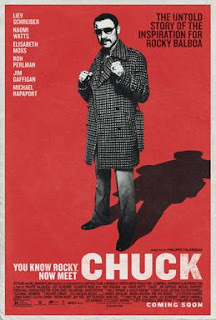 Sometimes the works of fiction we hold in high regard have a kernel of inspiration to them. Billy Wilder got prompted by a later scene in Brief Encounter and made The Apartment fifteen years later. And there are who knows how many songs ignited by what has happened in the songwriter's life.

Take also for instance boxing classic Rocky. The movie franchise that launched Sylvester Stallone to superstardom, it earned twelve Academy Awards nominations (winning three) and $1.4 billion in box office receipts. But as some may not know, Stallone got inspiration from a match between Muhammad Ali and Chuck Wepner.

Philippe Falardeau's Chuck focuses on how the success of the first Rocky movie went straight to Wepner's head. Already a minor celebrity in his hometown of Bayonne, New Jersey, he expects those he comes in contact with to know who he is. But his inflated ego starts to rub those close to him the wrong way.

Of course Rocky plays a crucial role in the film but another boxing film that has a key role in Chuck is Requiem for a Heavyweight. (Wepner states at one point that it's his favorite movie, and he quotes it at other times.) Apparently Luis Rivera provides a more accurate portrait of Wepner than Rocky Balboa ever did.

Chuck is less of a biopic of a forgotten figure in 1970s sports than it is a display of how fame can be poisonous to some people. (Hey, A Face in the Crowd also proved this sixty years ago.) Liev Schriber continues to prove that he should be given more starring vehicles (though he's also good in ensemble pieces). But overall, this is worth a look.

My Rating: ****
Posted by MovieNut14 at 9:57:00 AM
Email ThisBlogThis!Share to TwitterShare to FacebookShare to Pinterest
Labels: 2010s, movies, reviews