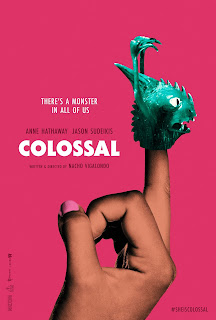 If there's one thing fiction is sorely lacking, it's a regular depiction of flawed women. More often than not, Hollywood shows the fair sex as pure beings with every aspect of their lives in perfect order. Obviously, that's bullshit. (And a load of it, too.)

This is why Gloria (Anne Hathaway) from Nacho Vigalondo's Colossal is very much a welcoming entry. When we're first introduced to her, she's unemployed and has a bit of a drinking problem. And to top it all off, her boyfriend Tom (Dan Stevens) has broken things off between them. Can her life get any worse? (Spoiler alert: it does.)

In examination of its first half, Colossal bears resemblance to the likes of The World's End. (The most telling comparison is in Gloria's drunken escapades.) But it's because of these escapades that make them frightening in the second half. (Heavy drinking is no laughing matter, folks.)

Speaking of the second half, it could be viewed as an unflinching portrait of abusive relationships and how to deal with them. Gloria and Tim don't get along very well following their breakup, especially with him constantly being at the end of his rope with her. (Surely he could've helped her get out of the hole she was in?) But boy, that's nothing compared to what Oscar (Jason Sudeikis) doles out.

Colossal continues to prove that there are, in fact, original works out there. (Sometimes all one needs to do is pay attention.) And while she had been getting hate for the last few years (for reasons unknown), hopefully this will regain respect for Hathaway.

My Rating: ****1/2
Posted by MovieNut14 at 11:12:00 AM
Email ThisBlogThis!Share to TwitterShare to FacebookShare to Pinterest
Labels: 2010s, movies, reviews