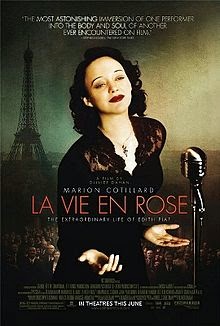 Olivier Dahan's La Vie en Rose is a film that focuses on a life that was tumultuous, chaotic and (above all else) wildly successful. This life is that of French singer Edith Piaf.

In a way, Piaf was the French equivalent of Judy Garland. Both of their careers started at a young age, both led lives of spectacular highs and lows, and both died as a result of their excessive lifestyles. (Both also died at the age of 47.) Was this intentional on Dahan's part?

Also, how could Dahan depict a life as stormy as Piaf's? Simple: cast an actress who's capable of the role. And Marion Cotillard is such an actress. Many actors can play a real-life person; only a select few are actually that person. Cotillard easily fits into the latter category.

La Vie en Rose isn't shot in the usual linear format for biopics. Rather than starting with the beginning of Piaf's career and ending with her death in 1963, it's displayed as to what made Piaf into the woman she became. A woman who lived a life of exuberant highs and devastating lows, there's something oddly fitting that the last song performed in the film is "Non, je ne regrette rien".

La Vie en Rose isn't perfect but though Cotillard's performance certainly is. It's the kind of performance you only get once in a blue moon when it comes to biopics. As for the film itself? Flawed but still worth a look.

My Rating: ****1/2
Posted by MovieNut14 at 12:11:00 PM
Email ThisBlogThis!Share to TwitterShare to FacebookShare to Pinterest
Labels: 2000s, movies, reviews