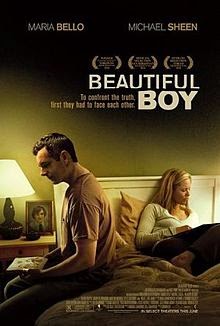 The opening shots of Shawn Ku's Beautiful Boy show Bill (Michael Sheen) and Kate (Maria Bello) in happier times. The following scenes show them in unhappy domesticity. (They don't even sleep in the same room.) It's made clear that they're on their way to divorce.

But then, tragedy strikes. Their son becomes a victim in a school shooting. Not just a victim, the actual perpetrator. Amid their grief, will they find that they need each other during this difficult time? Or will their loss drive them further apart?

Grief is a complicated matter and fiction frequently depicts it. (Hey, it's a good source of drama.) People cope with grief in different ways and Beautiful Boy provides two of the more common examples seen in fiction: the one who wallows in grief and the one who steadfastly avoids what happened. It's not anything new but it's still done well.

Sheen and Bello, both fine (albeit underused) actors, make the most of an otherwise average script. They argue, they yell, they cry, they silently blame each other. In essence, what people through grief feel as they try to cope. And both Sheen and Bello provide some solid work.

Beautiful Boy is good but flaws in the script prevent it from being great. Still, the work from Sheen and Bello makes the film worthy of a look. It's not the best of films but it has its moments.

My Rating: ****
Posted by MovieNut14 at 10:58:00 AM
Email ThisBlogThis!Share to TwitterShare to FacebookShare to Pinterest
Labels: 2000s, movies, reviews