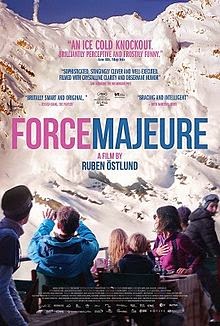 Marriage is a fickle thing, isn't it? (Then again, most relationships could qualify.) You feel as if you're with the perfect mate but as time wears on, you realize they're not as perfect as you first thought.

This is certainly a theme that runs throughout Ruben Ostlund's Force Majeure. Throughout the film, there's an aura of doubt amid the characters. What will happen to them by film's end?

What's shown in Force Majeure is how one would behave in the face of danger. But what if your decision has unforeseen consequences? This is a question that lingers throughout the film.

By many means, this is a film not usually expected from the country responsible for Ingmar Bergman. Frequently, Swedish films are of an existential nature. (Though there's a touch of that in Force Majeure as well.) If anything, there's a faint touch of absurdism to the film.

Force Majeure is by no means a brilliant film though it will leave you thinking about it afterwards. Still, it's the kind of film that that some people will have discussions about. (Sort of like any foreign film of this nature.)

My Rating: ****
Posted by MovieNut14 at 11:32:00 AM
Email ThisBlogThis!Share to TwitterShare to FacebookShare to Pinterest
Labels: 2010s, movies, reviews