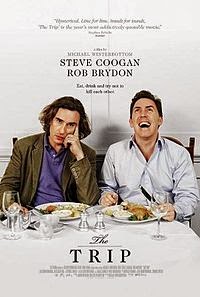 This is more of a small observation I've made in recent years, but the Brits really know how to make quality films and television. (Trust me, I've seen a lot amongst both fields.) Whether it be comedy or drama, those across the pond really know what they're doing.

The newest entry I've seen from the United Kingdom is Michael Winterbottom's The Trip. On paper, it doesn't sound like your average comedy. But it's actually quite clever as you watch it.

The film stars comedians Steve Coogan and Rob Brydon, both of whom I'm rather familiar with. (Coogan from films like 24 Hour Party People and Philomena; Brydon from panel shows like Would I Lie to You? and QI.) Now both men by themselves are funny. Together: priceless.

The thing about most comedies it that they're usually a mix of scripted material and improv. In the case of The Trip, it's mostly improv. (Then again, it is a film starring Coogan and Brydon as exaggerated versions of themselves.) The amount of self-deprecation throughout the film isn't something usually seen in comedies but it is British humor we're talking about, so that should come as no surprise.

The Trip is a rather charming film. (In the British sense, mind you.) Admittedly, the ending sort of altered the mood of the film (and it might have broken my heart a little) but that doesn't make the film any less solid. After all, a good comedy does one good.