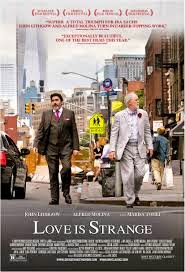 Thankfully, Ira Sachs' new film Love Is Strange has fulfilled that wish. The relationship depicted is not an angst-riddled one, not in the least. Instead, the bond between George (Alfred Molina) and Ben (John Lithgow) is much more subdued than what's usually depicted. (Not to mention they're adorable together.)

What's also worth mentioning about George and Ben is that their relationship isn't even the prime focus of the film. Instead, the film revolves around everyday life and those close to them. Again, this is a rarity amongst films with LGBT relationships but thanks to Sachs, he makes it work.

Love Is Strange is a sweet little film. There's not a single false note at any point. To sum things up, this film is perhaps the most honest film you will see all year. (And yes, the R rating is stupid.)

My Rating: *****
Posted by MovieNut14 at 9:41:00 AM
Email ThisBlogThis!Share to TwitterShare to FacebookShare to Pinterest
Labels: 2010s, director: Ira Sachs, movies, reviews