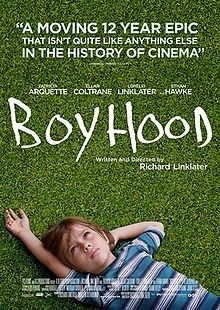 If there's one thing that can be said about Richard Linklater, it's that the man has patience. After all, he made a trilogy over the span of nearly twenty years, so what else could he be capable of?

The answer is in the form of his new film Boyhood. Shot over a period of twelve years, the film revolves around a young boy as he experiences life around him. And it's not an always happy one either.

It's certainly a bold move on Linklater's part to make Boyhood for that period of time. Sure, there have been films set during that time frame but filmed? It's not commonplace for films, that's for certain.

As is often the case with a Linklater film, the acting is excellent. Patricia Arquette and Ethan Hawke are very good in their roles but the main highlights are certainly Ellar Coltrane and Lorelei Linklater (the director's own daughter!). It's not very often you see consistent performances from young actors. (Usually such performances are...hollow.)

Boyhood is a one of a kind experience of a film. To repeat a cliche, it's something unlike any other film you've seen. Seriously, be sure to see it before the year's out.

My Rating: *****
Posted by MovieNut14 at 11:35:00 AM
Email ThisBlogThis!Share to TwitterShare to FacebookShare to Pinterest
Labels: 2010s, director: Richard Linklater, movies, reviews