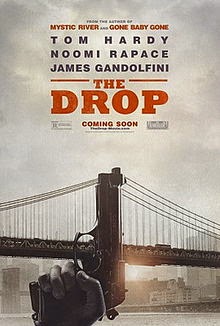 Ah, the crime film. Ever since Francis Ford Coppola and Martin Scorsese got famous for making them during the seventies, there have been countless other directors trying to repeat the same success. Some have been lucky, some not so much.

So how has Michael R. Roskam fared with his new film The Drop? Well, on the one hand, the film does provide entertainment to those who watch it. But on the other hand, it doesn't really provide anything new.

That said, the people involved are rather impressive. It's written by Dennis Lehane (the film's based on a short story of Lehane's), and the film certainly has a similar mood to that of Mystic River and Gone Baby Gone. Among the actors involved are Tom Hardy, James Gandolfini (in perhaps fittingly his last film role), Noomi Rapace and Matthais Schoenaerts, all of whom do very well.

Back to the original point. The Drop for the most part follows the usual crime film conventions. Trying to stay out of the game, violent criminals, obvious fates for certain characters...these have been seen time and time again throughout the film industry. You'd think for the author of Mystic River and Gone Baby Gone Lehane would've been able to come up with something new.

Long story short, The Drop is good but not great. Sure, the acting and directing are good, but the plot could have been used a little work. Still, it's pretty solid enough to warrant a look.