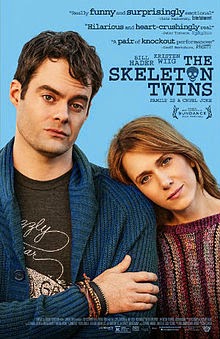 It's practically a requirement for a comedian or comedienne at some point in their career to do a serious role. It's true. There have been a number of Saturday Night Live alumni that have dabbled in drama.

And the newest members of the "comedians doing drama" group are Bill Hader and Kristen Wiig thanks to Craig Johnson's The Skeleton Twins. Now I haven't seen much of their work on Saturday Night Live, but what Hader and Wiig do here is amazing. (And I don't say that a lot, mind you.)

To be honest, a film focusing on the same material that The Skeleton Twins doesn't sound like the most appropriate for a comedy. (Then again, it's more of a drama with the occasional funny scene.) But when you have names like Hader and Wiig, all that matters is that the film works.

Now onto the performances. The film co-stars Luke Wilson and Ty Burrell, both of whom are very good in their roles. But The Skeleton Twins is Hader and Wiig's show. They have wonderful moments together, both funny and sad.

While it doesn't work in some scenes, The Skeleton Twins is still overall a very effective film. As mentioned many times throughout this review, Hader and Wiig are well worth the price of admission. Long story short, it's worth checking out.

My Rating: ****
Posted by MovieNut14 at 9:39:00 AM
Email ThisBlogThis!Share to TwitterShare to FacebookShare to Pinterest
Labels: 2010s, movies, reviews