The Prime of Miss Jean Brodie 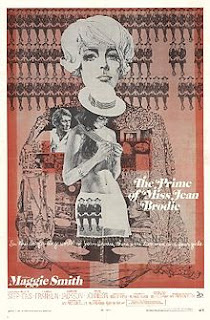 Schoolteacher Jean Brodie (Maggie Smith) is a woman of minor controversy. Her fellow teachers are shocked by the material she teaches her students. Art teacher Teddy Lloyd (Robert Stephens) lusts after her, despite being married. Music teacher Gordon Lowther (Gordon Jackson) also has a fondness for Miss Brodie. (Well, she is an admirer of the arts.)

But there is more to Ronald Neame's The Prime of Miss Jean Brodie than just that. It shows the determined nature a person can display when encountering certain people. (This is practically Miss Brodie's modus operandi.) It also shows how even strong-willed people can be weak behind closed doors.

Alas, this is also the main flaw of The Prime of Miss Jean Brodie. From what I read, Neame didn't read Muriel Spark's novel, which is quite different from the film. (Likewise with the stage adaptation released before the film.) It's not too severe of a difference but it is noticeable.

The performances are quite good. Amongst the supporting performances are Pamela Franklin and Celia Johnson, who hold their own against Smith. But Smith is the victor of the actors. Long before her Harry Potter and Downton Abbey days, she dominates the screen. (Suffice to say that Oscar win was justified.)

All in all, The Prime of Miss Jean Brodie is a decent film. Nothing extremely remarkable (Smith and Franklin aside) but it has its moments. It's certainly a film worth seeking out.

My Rating: ****
Posted by MovieNut14 at 10:58:00 PM
Email ThisBlogThis!Share to TwitterShare to FacebookShare to Pinterest
Labels: 1960s, movies, reviews