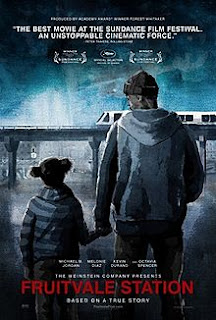 It's rather daring for Hollywood to make a film based on recent events. (Like, within five years of the first headline.) The news are still relatively fresh in everyone's minds but on the plus side, it still provides discussion.

Ryan Coogler's Fruitvale Station revolves around what happened in Oakland, California in the early hours of January 1, 2009. That was when Oscar Grant (Michael B. Jordan) was shot by a police officer. He succumbed to his injuries hours later, and his death shocked the nation. (The verdict on the police officer even more so.)

It's daring for Coogler to make a film like this especially as it gets released in the aftermath of George Zimmerman's trial. But it makes me wonder: was it Coogler's intent to make a film that mentally provokes its viewers? It certainly feels that way and I have no qualms over it.

I have to talk about Jordan's work here. He plays Grant as a young man simply trying to get his life in order. His relationship with his girlfriend is becoming strained, he's trying to be both a good son and father, and he wants to be an upstanding citizen. It makes the knowledge that he's living the last hours of his life all the more harrowing.

Fruitvale Station is really one of those films that will stay in your mind long after the credits have rolled. It also provides one hell of an emotional punch towards the end. Be sure to see this with an open mind and maybe a few tissues handy.

My Rating: *****
Posted by MovieNut14 at 11:08:00 PM
Email ThisBlogThis!Share to TwitterShare to FacebookShare to Pinterest
Labels: 2010s, movies, reviews