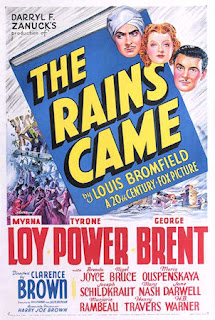 At a formal dinner early on in Clarence Brown's The Rains Came, former lovers Lady Edwina Esketh (Myrna Loy) and Tom Ransome (George Brent) reunite. He very much wants to rekindle their affair while she has her sights set on Hindu doctor Maj. Rama Safti (Tyrone Power). She admits she's trying to seduce Rama out of boredom but will it result in something else?

Released the same year as other big screen spectacles like Gone with the Wind and The Wizard of Oz, The Rains Came is mostly forgotten to today's audiences. But there's one aspect of the film that stands out: the special effects. It doesn't take much to see how it won the Oscar over the two previously alluded titles.

Being made within the Hays Code, Edwina's flirtations are treated with scorn by nearly everyone she encounters. How dare a woman go behind her husband's back (especially if he knows of them) for her own personal urges? After all, women are supposed to only be wives and mothers, nothing else. (At least that's what the most conceited of people would think.)

But Edwina develops a sense to redeem herself after spending more time with Rama. (If you're familiar with other fiction following this premise, you may know the outcome.) Admittedly such a conclusion might seem like cheap writing but bear in mind this was a time when women had very little standing outside a domestic setting; they had to break free somehow.

The Rains Came may follow the conventions of storytelling at the time but the work from its three leads warrant a look at least. (It also showed Power's underused talent.) It has that balance of adventure and romance, a common trait of films from that era, but one that only works a scant number of times. (This, of course, is one such example.)

My Rating: ****
Posted by MovieNut14 at 10:24:00 AM
Email ThisBlogThis!Share to TwitterShare to FacebookShare to Pinterest
Labels: 1930s, director: Clarence Brown, movies, reviews