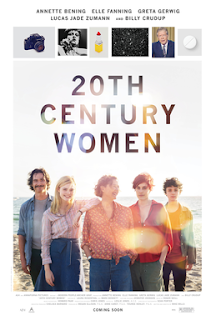 As the saying goes, behind every great man is a great woman. That could be best sum up Jamie (Lucas Jade Zumann) is Mike Mills' 20th Century Women. The woman in question is his mother Dorothea (Annette Bening), and what Mills presents is an ode to the women in his life.

Dorothea is of course a representation of Mills' own mother but she's not the only member of the fair sex on display in 20th Century Women. There's also Abbie (Greta Gerwig), an aspiring photographer with a creative mind (perhaps partly based on Mills' wife Miranda July?); and Julie (Elle Fanning), a rebellious friend of Jamie's. And they all try to help Jamie prepare for the world ahead of him.

Like what he did with his previous film Beginners, Mills provides solid work for his actors. Bening gives the best work of her career, Gerwig and Fanning continue to show their potential in Hollywood, and Zumann also shows immense promise with his career. (Boy, Mills sure knows how to pick 'em.)

Similarly, Bening's performance shows that there are in fact roles out there for actresses of a certain age. (It's just that writers are the ones that need to create them.) Just because leading ladies have a limited shelf life in the eyes of Hollywood executives, that doesn't mean their careers have to end in that exact moment.

20th Century Women continues to shows Mills' worth in Hollywood. (Honestly, not every film needs its protagonist to be the default white male.) As the past few years have shown, it's those who are willing to break free from the norms of Hollywood that stand out from the crowd. (Seriously, different is good.)

My Rating: *****
Posted by MovieNut14 at 11:02:00 AM
Email ThisBlogThis!Share to TwitterShare to FacebookShare to Pinterest
Labels: 2010s, director: Mike Mills, movies, reviews