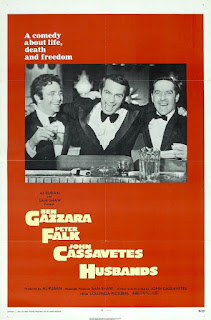 We're only young once in our short lives. It's once it's all over that we realize that there's not much time left on this planet. And boy, do mid-life crises make for excellent fodder when it comes to fiction.

That certainly comes to a head in John Cassavetes' Husbands. Following the sudden death of their friend, Gus (Cassavetes), Harry (Ben Gazzara) and Archie (Peter Falk) try to go on with their lives. But too much of their confined world reminds them of their late pal so they figure traveling could help clear their heads. But does it?

In the way of how the story's told, Husbands bears strong resemblance to Cassavetes' previous film Faces. It's less of a film than it is a voluntary glimpse into one's life. But as is often the case with Cassavetes' directorial contributions, it sure as hell isn't a glamorous one.

But in contrast to later films of his, Husbands doesn't have the same flow as Cassavetes' collaborations with wife Gena Rowlands. (Though -- as mentioned before -- from a storytelling perspective, this bears some resemblance to their previous film Faces.) Granted, perhaps Cassavetes was still trying to shake off his bad experience directing within studio regulations a few years prior. (There's definitely that air of defiance both here and in his later work.)

Husbands may not rank amongst his best work but it did show that Cassavetes was more than willing to break a few of the expected conventions in Hollywood at the time. After all, this was a time when the studio system was beginning to break down, and fresh blood was crucial to stay relevant with changing times. And guess who was waiting for that last pillar to collapse?

My Rating: ****
Posted by MovieNut14 at 10:13:00 AM
Email ThisBlogThis!Share to TwitterShare to FacebookShare to Pinterest
Labels: 1970s, director: John Cassavetes, movies, reviews