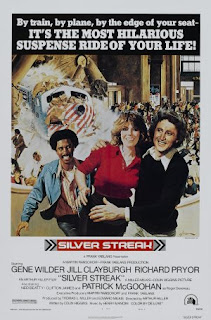 For years, filmmakers have been paying tribute to the Master of Suspense himself, Alfred Hitchcock. Even when the director was still alive and well, there were works being made with his influence all over them. And they're still being doled out today.

Arthur Hiller's Silver Streak (coincidentally released the same year as Hitchcock's swan song Family Plot) borrows part of its story from North by Northwest. Sure, there have been other imitations since the first film's 1959 release but there's something that Hiller brings to his film that makes it work.

Perhaps that something is -- like Hitchcock before him -- Hiller using an actor that's adept with comedy. Similar with Cary Grant, Gene Wilder has had his fair share of serious and silly roles prior to Silver Streak. And it's because of that detail the later film works as well as it does.

But Silver Streak isn't solely Wilder's show. Alongside him are the likes of Jill Clayburgh, Richard Pryor, Ned Beatty and Patrick McGoohan, just to name a few. They all hold their own, certainly, but it's Wilder's who carries the whole picture away by himself. (Okay, Pryor definitely has his moments as well.)

Silver Streak is further testament of Wilder's ability as a performer. (His collaborations with Mel Brooks during the previous decade merely acknowledged the masses to it.) He was one of those rare comedic actors that added a certain kindness to whatever he was in (which perhaps explains his role in Willy Wonka a few years before this). And that's on full display here, especially his scenes with Clayburgh.

My Rating: ****
Posted by MovieNut14 at 10:12:00 AM
Email ThisBlogThis!Share to TwitterShare to FacebookShare to Pinterest
Labels: 1970s, director: Arthur Hiller, movies, reviews