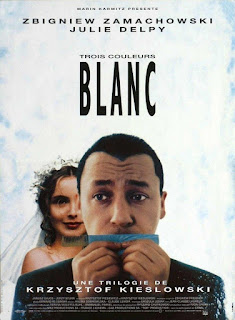 There are those who are basically a punching bag for the whole universe. They try and try and try but they can't escape life's punishments for them. (No one ever gets their fair shake of the stick.)

Karol Karol (Zbigniew Zamachowski) of Krzysztof Kieślowski's Three Colors: White fits this character type to a T. After unwillingly getting divorced from Dominique (Julie Delpy), his life starts to crumble. In his attempts to re-claim his dignity, he goes down a morally ambiguous path.

In contrast with the previous film of this trilogy, Three Colors: White has a dark sense of humor towards Karol's suffering. (It would make Kafka feel pity for him.) But there's something else on focus in the film, something that might not immediately take notice.

Being made in the years after the Cold War's end, Three Colors: White is also an observation on Europe's economy at the time. Kieślowski shows how following the collapse of the Soviet Union, countries once in the tight grip of communist control now thrive. (Okay, maybe that's a bit of a stretch but it's something to consider.)

While not as strong as its predecessor, Three Colors: White has its merits. As is often seen in fiction, the union between Karol and Dominique shows how a supposedly happy marriage is anything but. And as Kieślowski also depicts here, sometimes the tables are turned when one least expects it. (Sometimes for the better, sometimes for the worse; either way, it will affect their life.)

Posted by MovieNut14 at 10:02:00 AM
Email ThisBlogThis!Share to TwitterShare to FacebookShare to Pinterest
Labels: 1990s, director: Krzysztof Kieślowski, movies, reviews