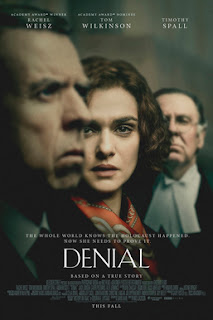 What causes us as a society to behave the way we do? Do we get taught such beliefs through the nature we're brought up in or do we learn them on our own free will? And, most importantly, when should such opinions be spoken about to a mixed audience?

In light of recent events, Mick Jackson's Denial becomes worryingly prevalent in its depiction of hatred. (And its events take place not that long ago either.) Again, what causes someone to think such dark thoughts?

The primary focus of Denial is whether or not the Holocaust actually happened. (Not even kidding.) Despite insurmountable evidence (including those who survived such a monstrous ordeal), David Irving (a truly despicable Timothy Spall) is practically frothing at the mouth to prove such an atrocity never occurred. What's worse, some other might agree with him.

What's shown in Denial -- its portrayal of seething hatred -- is more frightening in light of the recent US election. How much prejudice has made headlines since the events of November 8, 2016? If there's one thing we as a society need to do, it's to find a sense of peace and equality amongst our species rather than contempt and discrimination.

Denial is good, thanks primarily to David Hare's script. The work from Rachel Weisz, Spall and Tom Wilkinson is also good, likewise with the supporting cast. (If only this wasn't released during a time of re-emerging hatred...)

My Rating: ****
Posted by MovieNut14 at 4:48:00 PM
Email ThisBlogThis!Share to TwitterShare to FacebookShare to Pinterest
Labels: 2010s, movies, reviews