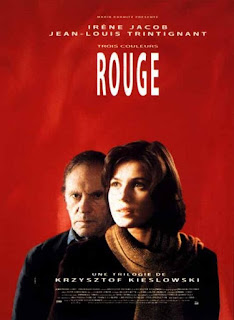 There's a sense of finality in Krzysztof Kieślowski's Three Colors: Red. (It being his final film before retiring -- and subsequently his death in 1996 -- might have something to do with it.) It's as though he wants to maintain some closure before his time on this earth was no more.

The film follows Valentine Dussault (Irène Jacob) as she goes about with her day. With a possessive boyfriend waiting for her back in London, she tries to find a sense of independence. Then she meets retired judge Joseph Kern (Jean-Louis Trintigant), and her life slowly changes.

What makes Three Colors: Red so interesting is its unassuming nature. We don't know what to expect from either Valentine or any of the other characters we're introduced to. It's that particular trait from Kieślowski that often ranks him as an unsung great in film.

And Kieślowski shows there's more to the film than it initially lets on. Three Colors: Red is through and through about that ever-present human need to connect. (The opening sequence best proves this claim.) Even when one claims they prefer being alone, they can ache for the care from someone else.

Three Colors: Red is one of those rare swan songs where it leaves the viewer satisfied yet leaves them wanting more. As Kieślowski had shown throughout his extensive career, he was interested in stories about the average human being's day-to-day life. Not those with fantastical elements or absurd plots; he just wanted to depict the world he saw with his own eyes.

Posted by MovieNut14 at 9:49:00 AM
Email ThisBlogThis!Share to TwitterShare to FacebookShare to Pinterest
Labels: 1990s, director: Krzysztof Kieślowski, movies, reviews