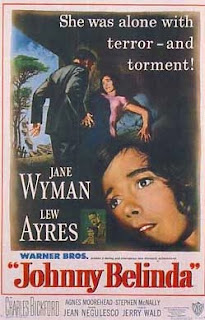 We've seen this time and time again. One little rumor spreads and like wildfire, it inflicts a lot of damage on anyone too close. It's solid fodder throughout fiction, especially in melodrama. The effects, however, vary from story to story.

Jean Neglusco's Johnny Belinda follows such a premise. Bear in mind this was released in 1948, the Hays Code still very much in effect. So to no surprise it was met with controversy upon its release. But does it hold up all these years later?

Admittedly the way Belinda (Jane Wyman) is perceived by many of the townsfolk makes the film show its age (she's regularly called "the dummy" because she's deaf-mute). But it's the compassion from town doctor Robert (Lew Ayres) that gives the film its heart.

And it's the work from Ayres, Wyman, Charles Bickford and Agnes Moorehead that makes Johnny Belinda so effective nearly seventy years later. (After all, this was one of those few films to be nominated in all four acting categories.) They're all great but it becomes evident almost immediately how and why Wyman won.

Johnny Belinda has its fair share of melodrama (particularly in the final third) but overall it's a solid work. (Would you believe its director would go on to do How to Marry a Millionaire five years later?) It's the kind of picture that was acclaimed upon its release but is now all but forgotten. If there's a reason to seek it out, the main one is Wyman's performances. (She didn't win for nothing.)

My Rating: ****1/2
Posted by MovieNut14 at 10:25:00 AM
Email ThisBlogThis!Share to TwitterShare to FacebookShare to Pinterest
Labels: 1940s, director: Jean Negulesco, movies, reviews