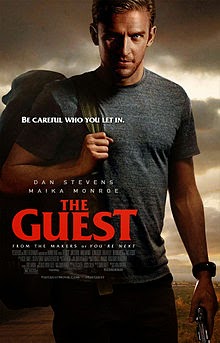 Adam Wingard's The Guest is clearly influenced by films of the late 70s and early 80s, Wingard's editing in some scenes is reminiscent of similar scenes from action films. A few of the music cues sound almost like the infamous theme from Halloween. In fact, were it not for a few props, it would look like a film from that time period.

Adding to the homages, The Guest behaves like a film from the era. Robby Baumgartner's cinematography sports a muted palette. The characters are openly flawed, much like those found in films of the then-new Hollywood movement. Not very often do you see a film paying tribute to a particular era of a genre.

And even with the various homages, The Guest knows how to stand on its own. It's a film that starts on relatively normal terms but slowly shifts into something far more disturbing. (To be honest, those are the best kind of films.)

At the center of The Guest is Dan Stevens. He seems quiet and polite but beneath those piercing blue eyes and that charming smile, something dark lurks. Suffice to say that with this performance Stevens took his Downton Abbey image and smashed it into a thousand pieces.

The Guest is very well done though it does lose some momentum in certain scenes. That said though, it's one hell of a slick ride. And oh, that ending is a stunner. "What the fuck?" indeed.

My Rating: ****1/2
Posted by MovieNut14 at 10:25:00 PM
Email ThisBlogThis!Share to TwitterShare to FacebookShare to Pinterest
Labels: 2010s, movies, reviews