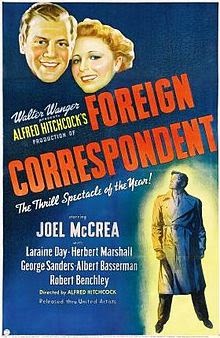 Our first glimpse of John Jones (Joel McCrea) in Alfred Hitchcock's Foreign Correspondent shows him clearly being unimpressed by his newspaper job. Shortly after his introduction, he gets sent off to Europe to cover a peace organization's conference. Soon he finds himself entangled in political intrigue.

Released the same year as the more popular Rebecca, Foreign Correspondent was one of several films of the era with a political slant. (Well, it was an era of political unrest.) And has it lost any of its bite after all these years? Not in the least.

There are certain elements of Foreign Correspondent that are rather grim in hindsight because of what would happen in the following year. There's talk of disagreements throughout Europe, not mentioning the possibility that the rest of the world would be on the brink of war as well. Ah, life and its cruel ironies.

On a different note, McCrea makes for an ideal Hitchcock leading man. Bear in mind this was before Hitchcock used the likes of Cary Grant and James Stewart but either way McCrea (better known for comedies like Sullivan's Travels and The More the Merrier) proves what he's capable of. It's a shame that he and Hitchcock didn't work together again.

Foreign Correspondent is certainly a lesser-known work of Hitchcock's and it's also one that should be seen. Sure, some of its politics may not resonate nowadays but the rest of them do. It's only a matter of time before we're at war once again.