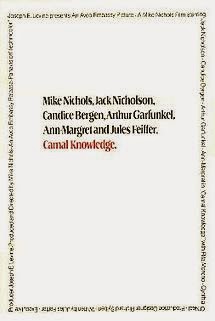 The opening dialogue of Mike Nichols' Carnal Knowledge shows how differently Jonathan (Jack Nicholson) and Sandy (Art Garfunkel) think when it comes to women. Sandy ponders about the emotional connection whereas Jonathan is only concerned about "big tits". This resonates throughout the film.

Bearing in mind how the characters in Nichols' first two films Who's Afraid of Virginia Woolf? and The Graduate interacted, it should come as no surprise that the characters of Carnal Knowledge behave in a similar manner. The insecure (Sandy) being manipulated by the deeply jaded (Jonathan). (See also Nick and Honey by George and Martha, and Benjamin Braddock by Mrs. Robinson.)

It's worth mentioning that this film was made at a time where sex was a very open topic amongst mixed company. (It should also be mentioned that this was made before the feminist movement was in full swing.) This was certainly something that couldn't have been made ten, fifteen years prior.

And there's also how masculinity is depicted throughout Carnal Knowledge. In an early scene, Jonathan and Sandy see Susan (Candice Bergen) and Sandy behaves in an awkward manner as he tries to meet her. This scene establishes how even though both men act confident around women, they're actually deeply unnerved when it comes to women.

Carnal Knowledge is very well done but the chauvinistic nature of it can be a bit much in some scenes. Still, the work from Nicholson, Garfunkel and especially Ann-Margret makes up for it. Sometimes sex brings out the worst in people.