The Americanization of Emily 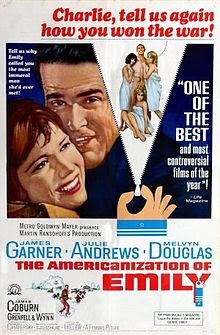 There's a certain level of audacity when it comes to war comedies. Sure, war is hell but sometimes those opinions on war get by without controversy because they're in a comedy. Still, they're sometimes insightful

Such is the case with Arthur Hiller's The Americanization of Emily. (Being written by Paddy Chayefsky certainly helps in that situation.) There weren't many films from that time period with such a jaded nature but even then there's a romanticized nature added to it.

Starring in The Americanization of Emily are James Garner and Julie Andrews. (Yes, a whole eighteen years before Victor/Victoria.) As would also be established in Blake Edwards' film, Garner and Andrews have great chemistry together. (They also stand well on their own.)

Back to Chayefsky's script. Cynicism was rare but unheard of when it came to Hollywood during its Golden Age. (After all, Billy Wilder's career was in full swing during this time.) Much like what he would do with Network the following decade (and Marty in the previous one), Chayefsky shows that we live in a bitter world and we have to make sacrifices for the sake of brief happiness. At least The Americanization of Emily is a bit more cheerful than Network.

The Americanization of Emily is good though it does get a bit too Hollywood in some scenes. The speeches delivered throughout the film (especially the ones from Garner) establish what was to be expected from Chayefsky in the years to come: a jaded perspective.