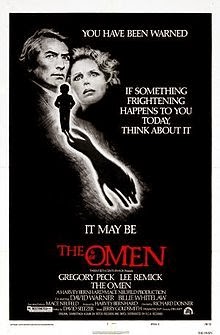 It's established early on in Richard Donner's The Omen that all is not well in the Thorn household. Yes, Robert (Gregory Peck) and Kathy (Lee Remick) are leading a quite happy life with their young son Damien (Harvey Stephens) but they've recently noticed things have gotten...strange.

There have been countless horror films that focus on the supernatural. Most of them rely solely on scares. Very few (mainly those from the last few years) have a sturdy story around the scares. (This is why I'm more fond of horror films from the fifties to the seventies.)

Much like The Haunting and Rosemary's Baby before it, The Omen relies more on the paranoia than the actual physical scares. You don't know if what Robert is discovering is true or he's slipping into insanity. That's good horror in my eyes.

To make any horror film convincing, you need the right actors to make it all the more terrifying. Donner wisely enlists the likes of Peck and Remick for his film. (It's more interesting in regards with Peck because of the reality subtext behind his role.) Also, Stephens is really creepy. (Then again, small children in horror films usually are.)

The Omen is a textbook example of what horror films should be like nowadays. (None of that gorn schlock.) Seriously, we need more that rely on nail-biting suspense, not a deluge of blood and guts. And...end rant.

My Rating: *****
Posted by MovieNut14 at 10:53:00 PM
Email ThisBlogThis!Share to TwitterShare to FacebookShare to Pinterest
Labels: 1970s, movies, reviews