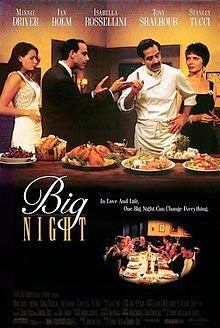 During an opening scene of Stanley Tucci and Campbell Scott's Big Night, you can just see the utter exasperation on Secondo's (Tucci) face as he explains Italian cuisine to an ignorant diner of his restaurant. This is something that's common between he and his brother Primo (Tony Shalhoub).

The brotherly bond between Primo and Secondo is a running theme throughout Big Night. As anyone with a brother or sister knows, the connection between two siblings is a rather dynamic one. Simply put, the bond between siblings is one like no other.

Big Night isn't just about brotherly bonds; it's also about the food. This is one of those films that you need to watch on a full stomach. (Watching it when hungry is rather unwise.) God, all that food looks decadent, doesn't it?

Another aspect of Big Night I admire is its ambiance. It captures the mood of 1950s small town life. Most films set or from that time period are often set in a bustling city but Tucci and Scott decided on the opposite instead. It's a small touch but I appreciate it.

Now I didn't adore Big Night like some people I know, but I did like it. There were several great performances out of the actors (I particularly liked Scott's bit part). All in all, Big Night is a pretty good film.

My Rating: ****
Posted by MovieNut14 at 7:02:00 PM
Email ThisBlogThis!Share to TwitterShare to FacebookShare to Pinterest
Labels: 1990s, movies, reviews