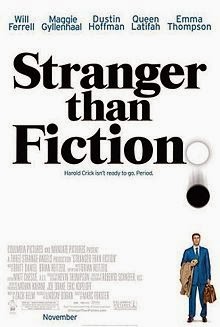 In the opening moments of Marc Forster's Stranger Than Fiction, a narrator describes the day of Harold Crick (Will Ferrell). It becomes strange for Harold when he begins hearing the narrator (and no one else can).

Now that opening paragraph could easily have you believe that Stranger Than Fiction was a comedy, especially since Ferrell is the star of the film. But it doesn't take long in the film to change in mood. (And it happens several times in the film as well.)

I think what makes the film work is that so many aspects of it simply work. It's hard to have both the story and the actors change in mood over and over again and have the film still work. Not many films can do that.

Oh, and speaking of the actors, they're all fantastic here. They all hit the right notes during their scenes, again a rarity amongst most films. Personally, I thought Emma Thompson stole every scene she was in. (Not to mention she was perhaps the most accurate depiction of a writer ever.) But I think the real shocker was definitely Ferrell. Can we get another role like this for him, please?

Stranger Than Fiction is a very lovely film. So much of it resonates once the credits have rolled. Also, on a different note, can we get another film like this for Forster to direct?