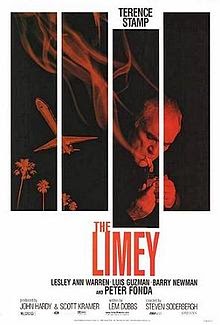 "You tell him...you tell him I'm coming. Tell him I'm fuckin' coming!" This threat from Wilson (Terence Stamp) pretty much sets the mood for Steven Soderbergh's The Limey. And boy, the film is a hell of a doozy too.

How so? Well, for starters, the film isn't exactly told in proper order. By that, I mean the editing by Sarah Flack presents the film in a different way than you would expect with the standard film. (Okay, not in the same way as, say, Memento.)

I'm not overly familiar with Soderbergh's films but I know what his style is like. (One thing I know of is that he's fond of yellow and blue lighting.) Anyway, his style is very much all over The Limey.

There's also something very subtle in The Limey that I really liked. Pay attention to the flashback scenes. Those are actually scenes from a film of Stamp's from way back when. It's a nice touch by Soderbergh.

The Limey isn't my favorite of Soderbergh's films I've seen, but I did very much like it. The best parts were definitely Stamp and Peter Fonda. So if you're a fan of Soderbergh or you want a throwback to films of the 1960s, The Limey is for you.