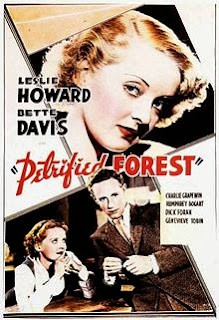 Every now and again, you come across a film where everything just works. The performances, the dialogue, everything. Most of the time they're films not many people have seen. Archie Mayo's The Petrified Forest is one such film, and the three major performances prove that.

The first performance comes from Leslie Howard, reprising the role he originated on stage. Like some of his other roles, Howard plays an intellectual that gets philosophical throughout the film. But what makes Alan Squier different from Philip Carey or Henry Higgins is that Alan is much more compassionate. This has probably become a favorite performance of Howard's.

The second performance comes from Bette Davis in a role that's noticeably lighter from some of her other works. As Gabrielle Maple, she plays a woman content with her life but longs to see the world. It's also nice to see her and Howard being civil to each other. (For those not getting the reference, go see Of Human Bondage.)

The third performance comes from Humphrey Bogart, also reprising his stage role and in one of his early film roles. As Duke Mantee, he makes his presence known whenever he's on screen. (No surprise as to why this role had him playing gangsters throughout his career.) Also doesn't hurt that said lasting presence is a trait that'll be forever present in his work.