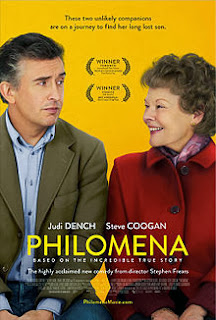 Stephen Frears' films are often ones I'm bound to like. He always garners lasting performances from his actors, a scenario I've noticed from every film I've seen by him. (I hope that's common amongst all of his films. Well, most of them.)

That trend continues quite strongly with his new film Philomena. As well as showcasing the work of its two leads, the film also takes a relatively heavy subject and adds a few well-placed touches of humor. (Though considering who one of the writers is, it makes sense.)

As many would know by now, Judi Dench is one of the best actresses working today. Here in Philomena, she adds yet another great performance to her long career. She balances the film's dramatic material and the script's comedic touches with ease. (Not many actors are capable of that.) Although Notes on a Scandal is my personal favorite, her work here can easily change that.

But the performance I was most surprised by was the one from Steve Coogan. Only familiar with him from 24 Hour Party People, I was really impressed by his compassionate work. Holding his own against Dench is one thing; giving one of the best supporting performances of the year is certainly another.

Philomena is simply one of those films that in the wrong hands would fail miserably. But thanks to Frears, Dench and Coogan, the film is easily one of the best films released this year. Be sure to see it.