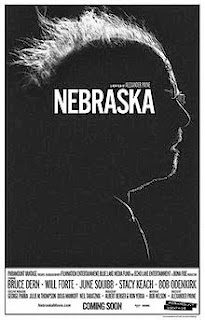 Alexander Payne's debut Citizen Ruth starred Laura Dern as someone who won't let life little inconveniences get in the way of their personal world. And in an ironic twist of fate, Payne has cast Laura's father Bruce Dern in a very similar role for his new film Nebraska.

When an actor is in their twilight years and they show they still have a good performance in them, that's always a good sign on the director's part for still having faith in said actor. (See also Robert De Niro in Silver Linings Playbook and Robert Redford in All Is Lost.) In the case of Dern, an actor I'm not overly familiar with (outside of his Oscar-nominated work in Coming Home), I think it's suffice to say he gives his best work in Nebraska. (Boy, I sure hope he gets nominated.)

This is common amongst Payne's films actually. Usually whomever is playing the lead for one of his films, the actor(s) will end up giving the best work of their career. (See also Laura Dern in Citizen Ruth, Matthew Broderick and Reese Witherspoon in Election, Paul Giamatti in Sideways, and George Clooney in The Descendants.) So how does Dern join these other actors? He takes a role any actor could play and makes it his own.

And like Payne's other films, the supporting work is great as well. It's obvious that Dern will get most of the attention when it comes to awards, but I sure hope that Will Forte and June Squibb will be equally recognized. (One can dream, can't they?)

Everything about Nebraska is great. From Payne's direction to the performances to Phedon Paramichael's absolutely gorgeous cinematography, the film just works on so many levels. Easily, easily one of the best films of the year.