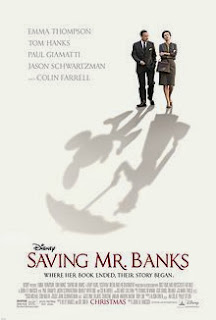 Drama behind the scenes. It happens on practically every set for a film or a TV show. Disputes with the higher powers, romantic entanglements, chaos on the set...hey, there's no business like show business.

John Lee Hancock's Saving Mr. Banks depicts the (mostly fictionalized) troubled production of Mary Poppins. The film features the disputes between author P.L. Travers (Emma Thompson) and Walt Disney (Tom Hanks) throughout the production's stormy early stages. Even though a good chunk of Saving Mr. Banks is purely for drama, it's certainly an interesting story to be told.

It's a good film but I think what's mildly frustrating about Saving Mr. Banks is its portrayal of Travers. Maybe since it's a Disney film (and badmouthing the studio's founder wouldn't exactly be wise) they have to portray Walt Disney in a positive light. Therefore Travers must be depicted as a bitter shrew of a woman wrought with emotional problems. Come on, Disney. Weinstein has more dignity than that.

But I will say that Thompson makes the most of her thin role. (It's also nice to see her in general.) Hanks in turn displays his usual charisma, which is essentially required when playing Walt Disney. Though I would like to highlight Colin Farrell's supporting work as well.

It's not the best film from this year, but Saving Mr. Banks isn't a complete loss. It's mostly redeemed by the performances, but certain depictions might rub people the wrong way. (It certainly did for me.) But it's still worth a look though I'd wait until DVD.

My Rating: ****
Posted by MovieNut14 at 11:28:00 PM
Email ThisBlogThis!Share to TwitterShare to FacebookShare to Pinterest
Labels: 2010s, movies, reviews