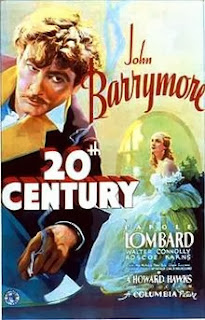 Within the first few moments of Howard Hawks' Twentieth Century, we see the beginning of the partnership of Broadway director Oscar Jaffe (John Barrymore) and acting hopeful Lily Garland (Carole Lombard). It's a rocky start to say the least, but their first play is a success.

Fast forward three years, and their partnership has become more bitter than an unripe lemon. She ditches him for Hollywood and her career thrives. (His in turn crumbles.) Then on a train from Chicago to New York, they meet after all these years, and...well, it's not a friendly reunion by any means.

As someone quite familiar with her work, it's clear to say that Lombard is very funny in this. But bear in mind that did this long before films like My Man Godfrey and Mr. and Mrs. Smith. In other words, this is Lombard's first foray in screwball comedy. (Hawks actually complained that Lombard was too stiff early on in production.)

But the absolute scene stealer of Twentieth Century is definitely Barrymore. Again, bear in mind the actor's other roles, so seeing him do screwball comedy could be a bit of a shock. And yet, he is an absolute riot here. (I also love what Hawks said to Barrymore to convince him to take the part: "It's the story of the biggest ham on earth and you're the biggest ham I know.")

Twentieth Century is a very funny film. Thanks to the manic performances from Barrymore and Lombard as well as Charles MacArthur and Ben Hecht's script and Hawks' direction, this is the benchmark for the many screwball comedies in the years to come. Go see it.