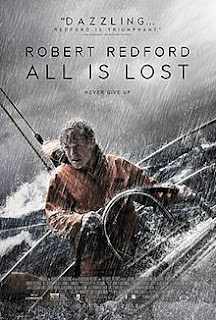 When J.C. Chandor's first film Margin Call hit theaters, many people were intrigued by the work of this new director. Seeing as how it featured many prominent names (and garnered an Oscar nomination), there were some who wondered what his next film would be.

That film ended up being All Is Lost, which is minimalist in every sense of the word. With very little dialogue and (technically) set in one location, All Is Lost shows you don't need a great deal going into a film to make one that's great.

What I liked the most about All Is Lost is that Chandor could have easily gotten a young, robust actor for the film's lead (and lone) role, but he didn't. Instead, he got Hollywood veteran Robert Redford, and it's the best work Redford's done in his long career. Could he snag a second Best Actor nomination? God, I sure hope so.

It's not just Chandor's direction and Redford's performance that make All Is Lost great. The score by Alex Ebert and the cinematography by Frank G. DeMarco are just as stunning. And yet both are used in subtle but brilliant ways.

All Is Lost is quite simply one of those films that comes along every now and again to show that less is definitely more. Every small detail and action of Redford's performance and Chandor's direction prove that cinema isn't a dying art; it's one that's being re-invented.

My Rating: *****
Posted by MovieNut14 at 11:56:00 PM
Email ThisBlogThis!Share to TwitterShare to FacebookShare to Pinterest
Labels: 2010s, movies, reviews