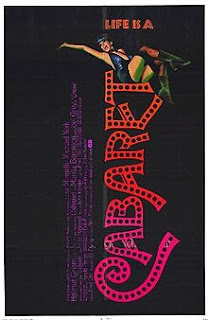 With certain directors, you can pick up on certain traits in their work as you watch their films. For some, it's noticeable after one film. For others, it takes a few viewings to notice them.

In regards with Bob Fosse, it depends on which films of his you see. Either way, one of the major characters will have a self-destructive lifestyle. (Lenny Bruce from Lenny and Fosse expy Joe Gideon from All That Jazz are prime examples.)

Sally Bowles from Cabaret is a milder version but a prominent one. She is by no means on the path of self-destruction but she certainly doesn't know when enough is enough. She's the kind of woman who likes the best of everything: alcohol, men and various small luxuries. But she longs for her name in lights more than anything else.

And Liza Minnelli makes Sally radiate. (Then again, whom else but the daughter of Judy Garland and Vincente Minnelli would be ideal as a hopeful entertainer?) Her musical numbers throughout the film are very reminiscent of those of her mother's during her prime. No surprise on how she got that Oscar. (Likewise to Joel Grey.)

Cabaret is a very good film though I'm more fond of Fosse's two succeeding films. Thanks to Minnelli and Grey's vibrant screen presences (as well as Michael York's subtle work), the film depicts carefree lifestyles amid a changing society. On that note, now I want to see a stage production of Cabaret. Thankfully there'll be one on Broadway in a few months' time.