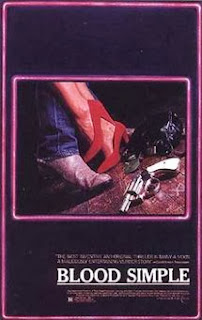 Jean-Luc Godard once said, "All you need to make a movie is a girl and a gun." This is also the guide to make a film noir. (I mean, they're practically essential.)

This is also what Joel Coen followed when he made his debut Blood Simple. Made with a shoestring budget and a simple premise, the film takes the standard crime drama and is given a few twists courtesy of Coen and his brother Ethan.

As with any early film of a prominent director, you can pick up on certain trademarks throughout. In regards with Blood Simple, there are subtle additions that would be seen in later Coen Brothers films. It's small stuff like lighting or editing, but they're very Coen Brothers.

But the most telling Coen Brothers element in Blood Simple is the (excuse the slight pun) intolerable cruelty the characters inflict on each other. It's just a detail like that must have made some critics back in 1984 raise a few eyebrows. (It's more of a shrug nowadays due to films being excessively violent.)

Anyway, Blood Simple is noir at its finest. It's not very often that you see a film with a limited production that resulted in a satisfying way. This isn't a film often talked about, and I don't understand why that is.