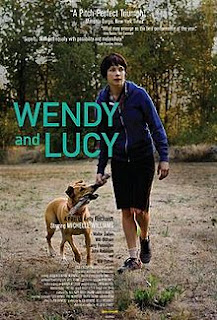 Kelly Reichardt's Wendy and Lucy certainly doesn't seem like most films in recent years. There's only one major star, there's nothing glamorous about the film and it's very minimal in almost every aspect. And yet, Reichardt provides a compelling story.

The major star in question is Michelle Williams, who would later work with Reichardt on Meek's Cutoff. Williams here doesn't use her natural beauty to snag a man not does she act dumb. She instead uses some common knowledge to stay safe and ahead of the game. It's a simple performance that leaves an impact.

The minimal nature of Wendy and Lucy is another feature that would be carried into Meek's Cutoff. Reichardt isn't interested in the flashy ways of telling a story. She wants to get right to the point with her film. That's a style of filmmaking you don't see very often.

Reichardt also made me realize that directors like her (read: female) are vastly underappreciated. Honestly, Reichardt, Coppola, Campion...all great directors still overlooked by the public. Granted, the latter two have earned their recognition from AMPAS, but when will other female directors follow suit?

Anyway, I really liked Wendy and Lucy though a few scenes felt off to me. Williams continues to confirm that she's one of the best actresses working today. As for Reichardt? I'm certainly looking forward to her next film.

My Rating: ****
Posted by MovieNut14 at 11:52:00 PM
Email ThisBlogThis!Share to TwitterShare to FacebookShare to Pinterest
Labels: 2000s, directed by women, movies, reviews