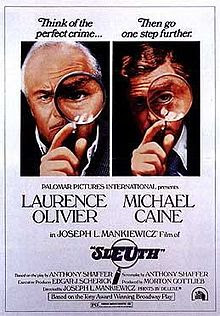 I certainly don't know why it is, but there's a certain allure to British productions. Maybe it's the actors, maybe it's the stories. Either way, I thoroughly enjoy them.

Joseph L. Mankiewicz's Sleuth essentially sums up why I'll usually prefer British productions. Revolving around two very different men, the film focuses on a battle of intellect between them. And as time wears on, their battles become more vicious.

I have a feeling that Laurence Olivier must have had some fun with his role. Far from his authority roles and Shakespeare parts, Olivier displays a certain sort of comedic sociopathy in his Andrew Wyke. And yet when he is defeated at his own game, you sort of feel sorry for him.

Michael Caine in turn does the opposite as Milo Tindle. You feel sorry for him initially but once he starts to understand his Andrew's mind games, your sympathy starts to dwindle. Just imagine what the response was towards the then-relatively unknown Caine.

Sleuth is damn clever. You really don't find films like this nowadays. Olivier and Caine are really great here, perhaps their best work in general. If you can get a hold of this film, it's definitely worth a look.