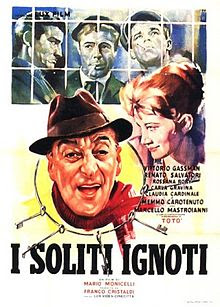 Many crime films revolve heavily around planning the perfect crime. Every detail must be absolutely perfect or you'll be caught by the authorities. Then there are those films revolving around crimes practically doomed from the start.

One such film is Mario Monicelli's Big Deal on Madonna Street. Revolving around a ragtag group of would-be robbers, the film proves that even the most thought-out plan can collapse spectacularly. (Honestly, I can't think of a scheme in the film that worked.)

It's amusing to see an Italian film that isn't depressing. (I've seen too many neorealism films.) And considering the last Monicelli film I saw (The Organizer), I was almost reluctant to watch this. Safe to say now that I'm glad I saw it.

Anyway, I was really amused by this. I initially thought it was going to be too silly for my tastes. Granted, it was in a few scenes but I really enjoyed it. (And this is coming from someone that's not too big on comedies.)

So Big Deal on Madonna Street was actually better than I originally thought. It certainly got me interested in what else Italy has done in the way of comedy. I'm quite sure there are a few that have flown past my radar...

My Rating: ****
Posted by MovieNut14 at 11:42:00 PM
Email ThisBlogThis!Share to TwitterShare to FacebookShare to Pinterest
Labels: 1950s, movies, reviews