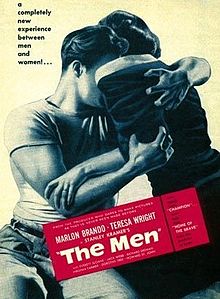 At times, a film is only still remembered because it contains the debut of a now prominent actor or director. (I mean, really. Is The Silver Chalice remembered for anything else besides introducing the blue-eyes beauty that was Paul Newman?)

This is the case with Fred Zinnemann's The Men, which features the film debut of acting legend Marlon Brando. Brando is frequently credited with beginning a new era in Hollywood (even though his acting "rival" Montgomery Clift showed up in Hollywood a few years before Brando.) Watching The Men shows the distinction between the glamorous and gritty eras of Hollywood.

It's pretty clear from the slightly melodramatic script that Brando feels out of place. Not because he's not good enough but rather he's too good. He needed to be in something with a sturdier script. (Thank God for A Streetcar Named Desire the following year.)

The Men isn't that bad of a film though. The script and some of the actors are stagy, sure, but the story's not too bad. After all, there weren't too many films from that time about a soldier readjusting to everyday life, which is a plot all too common now.

The only notable quality of The Men is, no surprise, Brando's performance, but again it's not as bad as I make it sound. There are its flaws, but it's a better acting debut than most of the others I've seen.