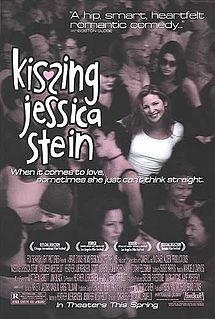 Charles Herman-Wurmfeld's Kissing Jessica Stein falls into the former category. It takes the exhausted plot of a dating failure that fears they'll never find "the one" and then the next person they meet could be just that, and slightly improves on it. The dating failure in question here is Jessica Stein (Jennifer Westfeldt) and the possible "one" is Helen Cooper (Heather Juergensen).

However, there are its downsides, and there are plenty. For starters, there's the fact that Jessica probably only starting dating Helen just because she couldn't find someone nice in the form of a man. (Her many standards are to blame.) And once people realize Jessica is seeing someone, they strain to know who she's seeing. It's annoying in this as it is in real life.

It's good in parts all in all, Kissing Jessica Stein was lacking. It doesn't go into great depths in regards with bisexuality, and many of the characters are annoying, including Jessica. It's worth a rental at most.

My Rating: ***1/2
Posted by MovieNut14 at 11:04:00 PM
Email ThisBlogThis!Share to TwitterShare to FacebookShare to Pinterest
Labels: 2000s, movies, reviews