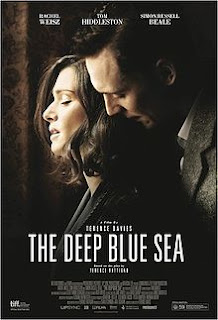 There's a perpetual sadness in the face of Hester Collyer (Rachel Weisz) that lingers throughout Terence Davies' The Deep Blue Sea. It's very evident when she's with her husband William (Simon Russell Beale). Even when she's with her lover Freddie Page (Tom Hiddleston) she has that look, no matter how happy she appears.

The audience never particularly learns of why Hester became unfaithful to her husband. My theory is that the thought of being married to a man old enough to be her father was getting more unappealing with each passing day. She wanted someone who was young and exciting, not old and dull. She finds that and more in Freddie but as time wears on, cracks appear.

The acting is superb. The searing look of betrayal on Beale's face as William learns of Hester's infidelity and in scenes afterwards is haunting. Hiddleston goes through a number of emotions throughout the duration of the film, never overdoing any of them, rendering him an actor to keep an eye on. But this show belongs to Weisz. Her layered performance is what awards recognition is made of, the very thing I hope she gets.

Much like the use of muted colors in Tinker Tailor Soldier Spy, The Deep Blue Sea uses dull shades to emphasize the film's mood. Davies wants there to be no bright colors to lower the mood. (Even Hester's blood red overcoat looks drab.) The use of harsh incandescent lighting is also used to capture this feeling.

There are problems with the pacing but that aside, The Deep Blue Sea is a fantastic film. Not many films focus on a broken romance as well as this. Weisz, Hiddleston and Beale are great in this anti-romantic film.